Another milestone has been reached at the Rail Academy Newport with the HCMT Mock-Up being lifted and relocated to the workshop building.

This is an exciting step that provides training opportunities at RAN for the community to learn how to about the new train fleet that will be used in Melbourne.

The mock-up consists of one full coach with a driver’s compartment and one-half coach with a combined weight of approximately 44 tonnes.

Stuart Fraser, Rail Training Centre Manager said the HCMT would provide much needed training simulation for those preparing to work and currently working in the rail industry.

“It was not an easy task to lift the HCMT into place. The lift was delayed by a day due to hazardous air quality because of the bushfires,” Stuart said.

“The team worked hard, and the lift was completed in four days with the train now fully accommodated in the RAN Workshop building.”

It was a big effort of multiple teams that helped lift the HCMT. The Western Program Alliance assisted RAN by providing the safety management required to shift a vehicle of this size.

Membreys Transportation used a mix of lifting equipment, including a 250-tonne crane to lift the train firstly on to a truck which then relocated the HCMT to the Workshop.

The HCMT will provide a realistic space where members of the public can develop independent travel skills, and railway staff can build their competence in a range of customer facing roles.

The HCMT is the latest facility available at Newport and will be open to bookings for training purposes. To find out more about how you can use the Newport facilities, contact the Rail Academy team at Rail.Academy@levelcrossings.vic.gov.au 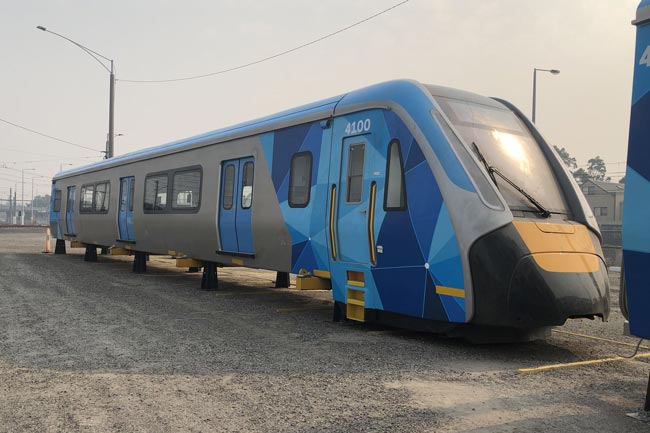